There I was, minding my own business and reading Punchbowl News, when I came across this item by Jake Sherman.

Sen. Rick Scott (R-Fla.), the former chair of the NRSC, is running an ad nationwide touting his race against Mitch McConnell for Republican leader and his 11-point plan, which became a widely used Democratic talking point.

The new spot is running in D.C., New York, Philadelphia and Los Angeles.

Scott is up for re-election in Florida in 2024, but this ad isn’t running in Florida, according to AdImpact. This is sure to raise lots of eyebrows in Senate GOP circles.

It sure raised mine, Doc. What the hell’s that all about?

Let’s begin at the beginning.

Income Taxes for All? Rick Scott Has a Plan, and That’s a Problem. 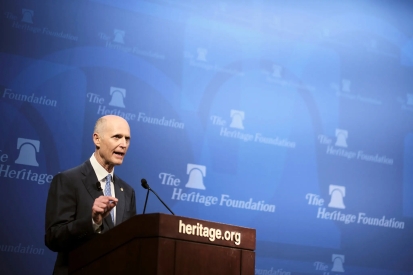 WASHINGTON — Senator Rick Scott of Florida, the somewhat embattled head of the Senate Republicans’ campaign arm, said one utterly indisputable thing on Thursday when he stood before a packed auditorium of supporters at the conservative Heritage Foundation: His plan for a G.O.P. majority would make everyone angry at him, Republicans included.

It was an odd admission for the chairman of the National Republican Senatorial Committee. His leader, Senator Mitch McConnell of Kentucky, has repeatedly told Mr. Scott to pipe down about his “11-Point Plan to Rescue America,” with its call to impose income taxes on more than half of Americans who pay none now, and to sunset all legislation after five years, presumably including Social Security and Medicare.

According to this CNN report by Alex Rogers and Steve Contorno, other proposals in Scott’s plan included “ending imports from China, cutting the federal government workforce by 25% and building a wall on the US-Mexico border and naming it after former President Donald Trump.”

As everyone except Rick Scott could have told you, the whole thing went over like the metric system.

Especially lathered up was Minority Leader Mitch McConnell (R-I’m de captain here!), as he made clear at a press conference reported by CNN.

“Let me tell you what would not be a part of our agenda,” McConnell said. “We will not have as part of our agenda a bill that raises taxes on half the American people, and sunsets Social Security and Medicare within five years.”

“That will not be part of the Republican Senate majority agenda,” he reiterated. “We will focus instead on what the American people are concerned about: inflation, energy, defense, the border and crime.”

Apparently undaunted by the widespread backlash he encountered at the time and his subsequent beatdown by McConnell in last fall’s Senate leadership bakeoff, Scott has doubled down with his current TV spot.

Here’s his pitch, annotated for your convenience.

People told me not to run for Republican leader against Mitch McConnell. They said I wouldn’t win. (Duh)

I knew it was gonna be hard. (As in, impossible)

But we gotta start somewhere. (Too bad Rick Scott is currently nowhere)

Look – we’re on the road to woke socialism. (His proof: A screenshot of Alexandria Ocasio-Cortez)

And Republicans are just a speed bump. (Not even that smart, honestly)

We can’t keep doing the same old thing. It’s time for Republicans to be bold, to speak the truth, and to stop caving in. (The way Mitch McConnell keeps doing)

Help us change our party – join us at RescueAmerica.com. (Please give me money so I can run more noodleheaded ads like this one)

I’m Rick Scott. I approve this message. (Of course you do)

Scott is spending a reported seven figures on the national ad buy, which truly makes you wonder why he doesn’t just set his money on fire.

Meanwhile, Politico Playbook PM reports that a new ad campaign has been launched by the National Republican Senatorial Committee, whose chairman until 12 days ago was [checks notes] Rick Scott.

Inconveniently for the NRSC, Morning Consult’s Eli Yokley just reported that “60% of Montana voters approve of Democratic Sen. Jon Tester, making him the most popular incumbent expected to face a competitive 2024 contest.”

So maybe not the wisest use of the NRSC’s money.

The Doc’s diagnosis: It’s hard to imagine that those NRSC ads came together in the past two weeks, which means they probably represent more of Rick Scott’s handiwork. If so, the logical conclusion would be a) he has four middle fingers, and b) none of them are very flippin’ effective.