The new film Philomena has opened to great reviews, except maybe for one, as this New York Times movie ad noted on Thursday. 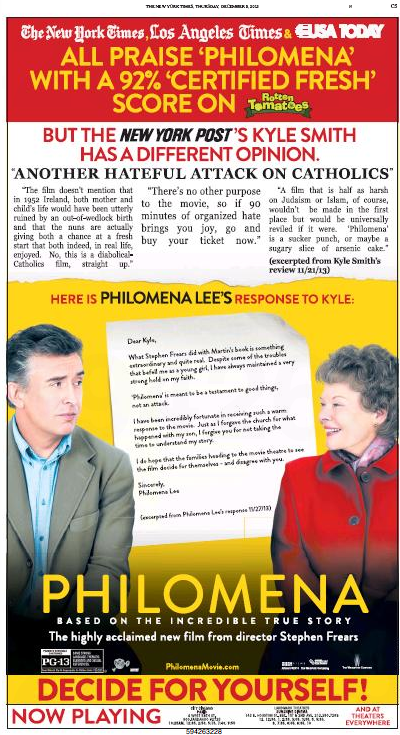 Don’t you think it was incredibly brave for the moviemakers to highlight that critique, Doc?

‘Philomena’ another hateful and boring attack on Catholics 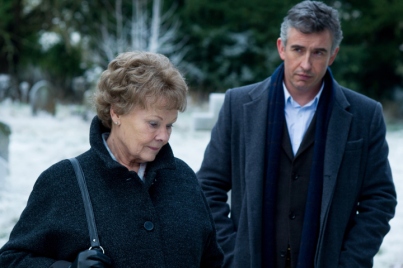 There’s no other purpose to the movie, so if 90 minutes of organized hate brings you joy, go and buy your ticket now.

For the rest of us, the film is a witless bore about a ninny and a jerk having one of those dire, heavily staged, only-in-movies odd-couple road trips.

But here’s the thing: That review ran two weeks ago.

So maybe the Times ad is more calculated than irritated.

Gotta hand it to Harvey: When he sees an angle to boost the profile of his movies, he goes for it. The Weinstein Company is placing an ad in tomorrow’s New York Times referencing the skirmish between NY Post reviewer Kyle Smith and the real-life Philomena 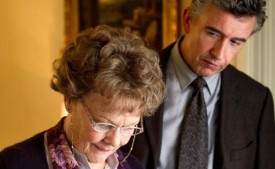 Lee, the subject of the distributor’s Oscar-season pic Philomena directed by Stephen Frears and starring Judi Dench as Lee. That’s the rift Deadline’s Mike Fleming Jr. told you about first last week by publishing Lee’s response to Smith’s review that called the pic among other things an attack on Catholics.  The NYT ad excerpts Lee’s letter to Smith that Fleming ran full and comes complete with a a call to action — “Decide For Yourself” — even though the movie’s been in the marketplace since the week before Thanksgiving.

Yeah – decide for yourself.

One comment on “What’s Up with the NYT ‘Philomena Gets Her Irish Up’ Ad?”