So I’m reading the New York Times the other day and what do I see but this full-page ad: 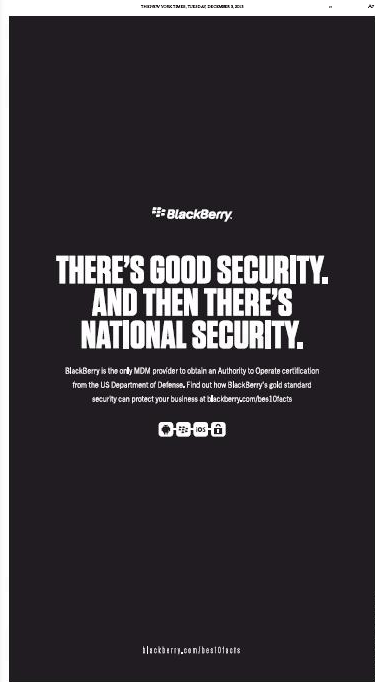 Wait – BlackBerry? Gold standard security? Aren’t these the same bozos whose market share has fallen to 1% in the U.S. and zero in China?

So how do they wind up in the same sentence as the US Department of Defense?

Tell me that, Doc.

Clearly, national security is the last refuge of scroungers.

New research on Monday revealed that BlackBerry’s (BBRY) share of the U.S. smartphone market recently inched below 1%, as the handset maker grapples with disappointing sales of new phones.

According to Kantar Wordpanel ComTech, BlackBerry held market share of just 0.8% for the three months ended Oct. 31. The news is worse in China, where the Canadian company now has no share of the market. BlackBerry’s strongest showing is in Great Britain at 3.3%.

BlackBerry once pioneered the smartphone industry, but its fortunes quickly turned amid competition from the likes of Apple (AAPL) and Samsung.

Regardless, BlackBerry has a spiffy new website and a chirpy interim CEO who spends most of his time whistling past the mobile graveyard.

BlackBerry tries to shoo off vultures in latest open letter

BlackBerry is tired of rival mobile device management (MDM) companies circling its body like a swarm of ravenous vultures. In an open letter to enterprise customers posted on Monday, interim BlackBerry CEO John Chen said that his company is “very much alive” in the enterprise mobility space and that businesses shouldn’t listen to MDM vendors who want them to throw away their BES.

“You’re hearing a lot of noise in the market about BlackBerry,” Chen begins in his letter. “MDM vendors are undoubtedly inviting you to webinars and enticing you to switch off your BES. We want to set the story straight about BlackBerry in the Enterprise, both for our existing customers and for those about to implement BYOD and MDM. We are very much alive, thank you.”

What makes the letter particularly interesting is that it indicates that BlackBerry really is waving the white flag in the consumer mobile device market and is going back to putting enterprise devices and services first.

Yo – the CrackBerry is dead. The only place it’s going is away.

One comment on “What’s Up with BlackBerry’s ‘Department of Defense’ Ads?”