Well the Doc opened the old mailbag today and here’s what poured out.

I was reading the New York Times on (Black) Friday when I came across this full-page ad:

Does that make any sense? What kind of business are these people in?

Yeah, the Boston Globe ran the four-color version of the ad, where the jacket looks even funkier.

So it was all about the Black Friday Worn Wear Party, which featured the documentary film Worn Wear (118,619 YouTube views).

Patagonia has launched The Common Threads Partnership (Reduce. Repair. Reuse. Recycle. Reimagine) that’s designed “to reduce excess consumption and give the planet’s vital systems a rest from pollution, resource depletion and greenhouse gases.” The website says over 60,000 people have taken The Pledge.

Kind of reminds the Doc of the Media Foundation’s annual rub-their-face-with-a-brick Buy Nothing Day, which is also tied to Black Friday. The  anti-consumerism group would try to run an ad like this in the ramp-up to Shopapolooza:

Uh-huh – what TV station in its right mind is going to sell time for that? Can’t you just see the conversation after the spot airs:

Retail guy: Are you out of your mind? I just spent $100,000 on your station telling people to shop like crazy the day after Thanksgiving, and then you turn around and tell them not to? What the hell!

Then again, as Peggy Noonan noted in her Wall Street Journal column this week, a sort of Blacklash Thursday movement has emerged.

There has been a nice backlash on the Internet, with petitions and Facebook posts. Some great retailers refused to be part of what this newspaper called Thanksgiving Madness. Nordstrom did not open on Thanksgiving, nor did T.J. Maxx or Dillard’s. P.C. Richard & Son took out full-page ads protesting. The CEO was quoted last week saying Thanksgiving is “a truly American holiday” and “asking people to be running out to shop, we feel is disrespectful.” Ace Hardware said, simply: “Some things are more important than money.” 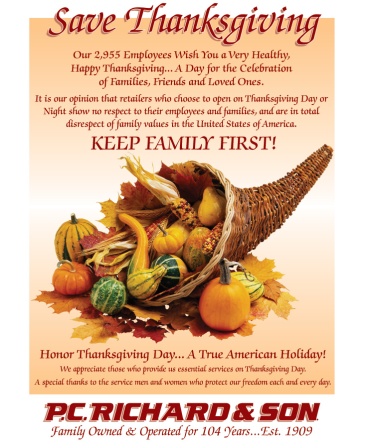